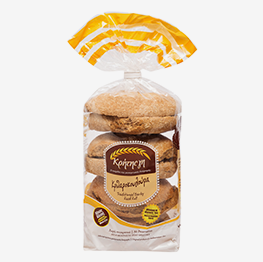 Cretan rusk originated from the era where Cretans had to live a long period away from home, either because they were shepherds, sailors or farmers in remote areas. No refrigerators or preservatives were available and Cretans had to carry food that could last for many days.

The need of food storage forced Cretans to double bake the bread they made so as to reduce any moisture or various bugs attracted.

The double baked bread is what we know today as “ntakos”.